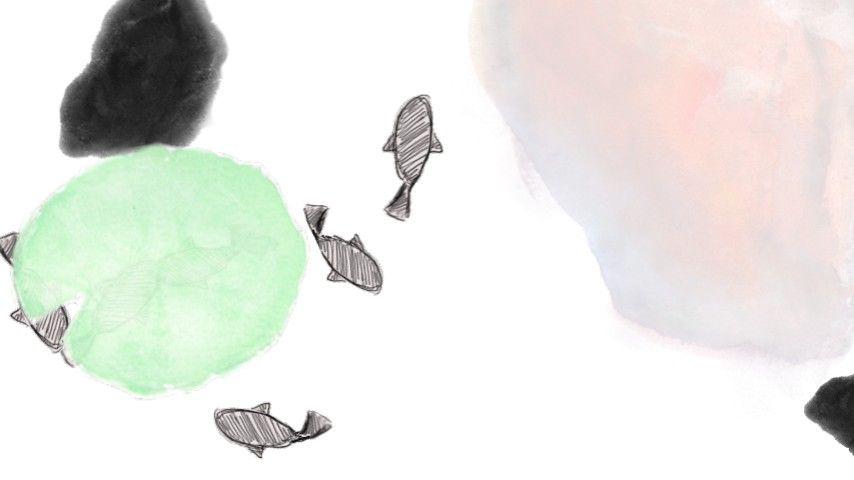 There are, in retrospect, a surprisingly small number of games about being a fish. Whilst there are certainly some memorable outliers, such as Feeding Frenzy or flOw, there's a definite dearth of games in which you control a fish. This is probably because bad things happen to fish in video games. For every playable fish in a video game, there are dozens of games in which the player character wrenches potentially hundreds of fish out of the water in a violent manner and then eats them or sells them. Heck, even when you get to control the fish they more often than not are under repeated threats of being swallowed whole by larger fish. Quite frankly if you're a fish in a video game and you're not a yellow fish detective or Will Smith fish, you're going to be constantly fleeing for your life.

And so we come to the topic of Guppy, a game in which you play as a fish. And get eaten by larger fish. A lot.

The gameplay of Guppy is simple, requiring only two buttons to play. The player is a small fish moving around a pond tasked with eating as many flies as possible before a larger fish can eat the player. Control of the fish is supposedly a simulation of actual fish movement (albeit on a 2-dimensional plane): The player swishes the guppy's tail with the left and right keys which both generates momentum and turns the fish. The key to playing the game is in both the careful timing of such swishes (mashing the buttons too quickly doesn't necessarily generate as much momentum as decisive, well timed swishes of the tail) and the balance of momentum against control. It can be difficult at first, but after a little practice I found myself being able to swim around the screen with a reasonable level of control and accuracy, albeit with some difficulty stopping during the quicker movements. 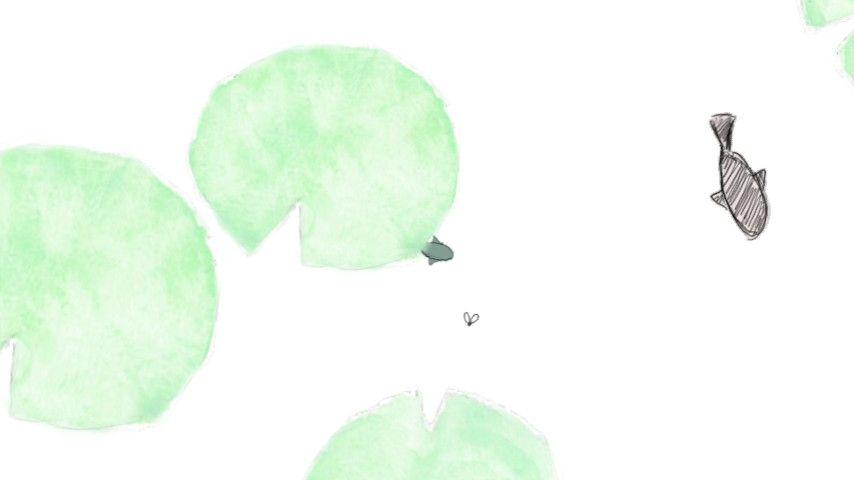 But it's at this point where the supposed simulation ends, and the game's actual design becomes apparent: whenever the player collects a fly, the resulting ripples alert every large fish in the pond, who will swarm the player if they stick around. Whilst the game starts with only the one fish, the further the player advances into the game the more there are to deal with up to a maximum of eight, and so the more dangerous collecting each fly becomes. Get caught by a big scribbly fish and it's an immediate game over, back to square one.

Luckily, the pond isn't an empty void filled with flies and massive fish, and there are a few tricks that the player can use to avoid being eaten immediately. Each time the game starts over a new pond is randomly generated, with a random number of rocks and lily pads scattered around the minimalist environment. Rocks are simple obstacles that offer a barrier between the player and larger fish, while lily pads offer places for the player to hide: Whilst under a lily pad, the player's fish turns a satisfying shade of green not only marking it as invisible to the larger fish but also making it invulnerable to collisions with the larger fish until they leave the safety of the undergrowth.

The game is, essentially, an arcade stealth game. And one with a simple enough combination of mechanics, risk vs. reward gameplay loop and high-score seeking outcome that makes it quite moreish. And it's quite pretty too, in a minimalist way. Whilst each pond is represented, for the most part, by an empty white background, the game populates them with enough hand-painted details that it comes to life. Each randomly generated level is full of life and smatterings of detail, whether it be in the form of small schools of fish meandering around, the bubbles that pop when your fish runs through them or the sunken rocks that lend a momentary bit of texture to the minimal backdrop, there's always something aesthetically pleasing to help your tiny fish navigate the reasonably sized pond. 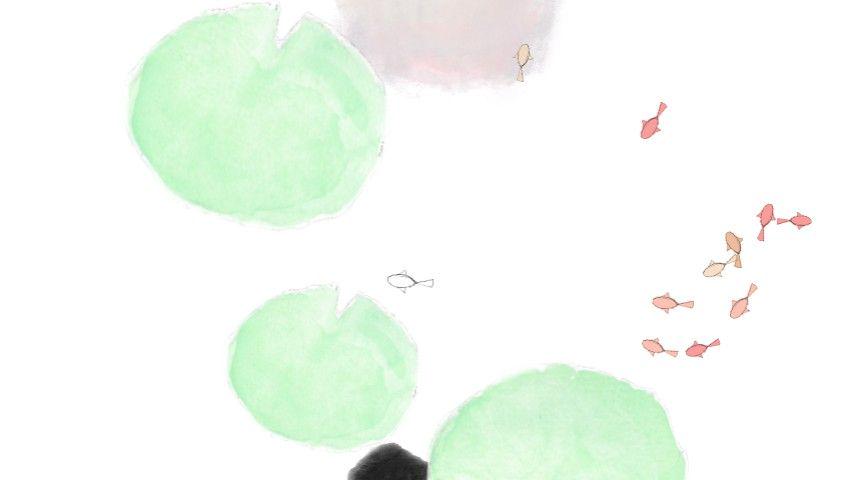 However, the crowning achievement of the game's aesthetic is the music. Guppy's soundtrack consists of a handful of rhythms and leitmotifs that the game combines, fading tracks in and out depending upon what the player can see on the screen at any time. The player's theme forms the basis of the tracks with the calm plucking of the high notes of a guitar, while a larger, deeper and more ominous string instrument generates a feeling of dread whenever a predatory fish is on the screen. Aesthetic elements have their own themes and instruments too; the presence of bubbles adds a subtle synth to the track whilst schools of fish have their own rapid, darting arrangement (which I want to say is from a viola but I know nothing about music). My personal favourite though is the theme for a large friendly fish who receives a slow brass theme that seems to imply that he's been through some things, but now he's big enough to be safe from the predators. Like everything else in the game, the music is extremely simple but constructed and tweaked in such a way that it becomes more than the sum of its parts.

The game's minimalist nature also works against it, however. The game's UI is so lacking (ie, nonexistent aside from an initial press left and right to swim dialog) that had I not found accidentally found the game's manual whilst looking to see if there was anything in the game's folder, I'd probably never have realised that the game has a dynamic split-screen multiplayer feature that can be activated at any time using the return key. And it's a shame that the graphics are essentially locked to a 480p resolution. Whilst I have no objections to playing the game in a window, it's kind of sad that the game's minimalist watercolour and pencil charm degrades so badly when stretched out. The charm of a pencil sketch fish is immediately lost when you zoom in enough to see pixelation and the slightly messy anti-aliasing the game uses to keep things looking sharp. It shatters the illusion somewhat.

But quite frankly, none of this is a deal-breaker. Guppy is an absolutely tiny title that punches far above its weight and has kept me entertained in quickfire bursts for more than two hours so far, and which I will more than likely be heading back to for more quick fixes in future. It combines a level of simplicity with excellent gameplay, and a level of polish in sound design that would befit a much better looking title. Whilst the experience is ultimately quite shallow and won't be to some people's tastes, for anyone looking for something immediate and arcade-ish I wholeheartedly recommend giving this one a look.

Guppy is available from Steam and itch.io.