Back when I was little I used to make games all the time. They weren’t good. They were usually very basic, ugly things that I would make in The Games Factory (a now ancient piece of game development software that has since evolved into the Clickteam Fusion line of products) that were far more full of cutscenes than actual content, and which I would hand out to my friends on 3.5″ floppy discs. Because I’m old. Somewhere along the line I just stopped trying to make games. Whether it was because I didn’t have the time, or because of the depression and anxiety I suffered in my early twenties I just reached a point where I ceased putting together my half-hearted jaunts into development and forgot that making games was something I’d ever actually done.

The idea for ‘For King Trivia!’ came about during a playthrough of the CD32 version of Trivial Pursuit. I felt that there weren’t enough good quiz games about at the moment, and considered the idea of making some sort of nightmarish fantasy-themed combination of Trivial Pursuit and Mario Party in which players would have to contend with both trivia and a constantly shifting set of objectives. This was quickly changed to a roguelike quiz game thanks to a combination of me reigning in my ambitions to something more approaching my actual abilities and the creeping realisation that if anyone ever actually combined Trivial Pursuit with Mario Party they would create a product that had the potential to unequivocally destroy friendships forever. Maybe later, then.

But right now the idea for ‘For King Trivia’ is pretty solid. And kind of simple. The plan, as I see it, is as follows. 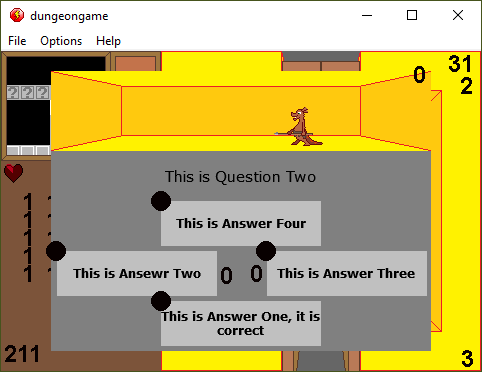 The prototype. It's not functional, but many aspects of the game are already implemented.

Amongst the many other challenges I’ve set myself up for this year (make Mostly Kobolds a thing, try to do something productive every day, fight everybody who gets in the way of me getting a VR headset) I’ve decided to set myself a massive challenge. One that I doubt that I’ll actually be able to do. Over the course of this year, I plan to create and release a complete version of For King Trivia. It’s a bit of a stretch, but hey, you’ve got to challenge yourself sometimes.

I actually made an early prototype of the game last November, during a period of time in which I required a major distraction. This simple proof of concept is extremely unfinished and very broken, but it has the most important elements implemented; the game is able to generate (very basic, usually broken) dungeons that the player can move around, and can summon a simple battle mechanic in which it calls up random questions from an external file. Development stalled, however, when I started working on the graphics and the UI and realised that absolutely none of that looked any good or was what I wanted the game to be. In the end I had to scrap it, but what I’ve learned from making that prototype should make the production far better.

And so we reach the present. The first week or so of the year. “Right!” I told myself. “The first thing to do is to develop a more controlled and predictable method of dungeon generation. I’ll just quickly throw together some placeholder tiles to feed into the software so that I can prove that my plan will actually work…” I then immediately got carried away and spent several days worth of dev time making that tileset look good. 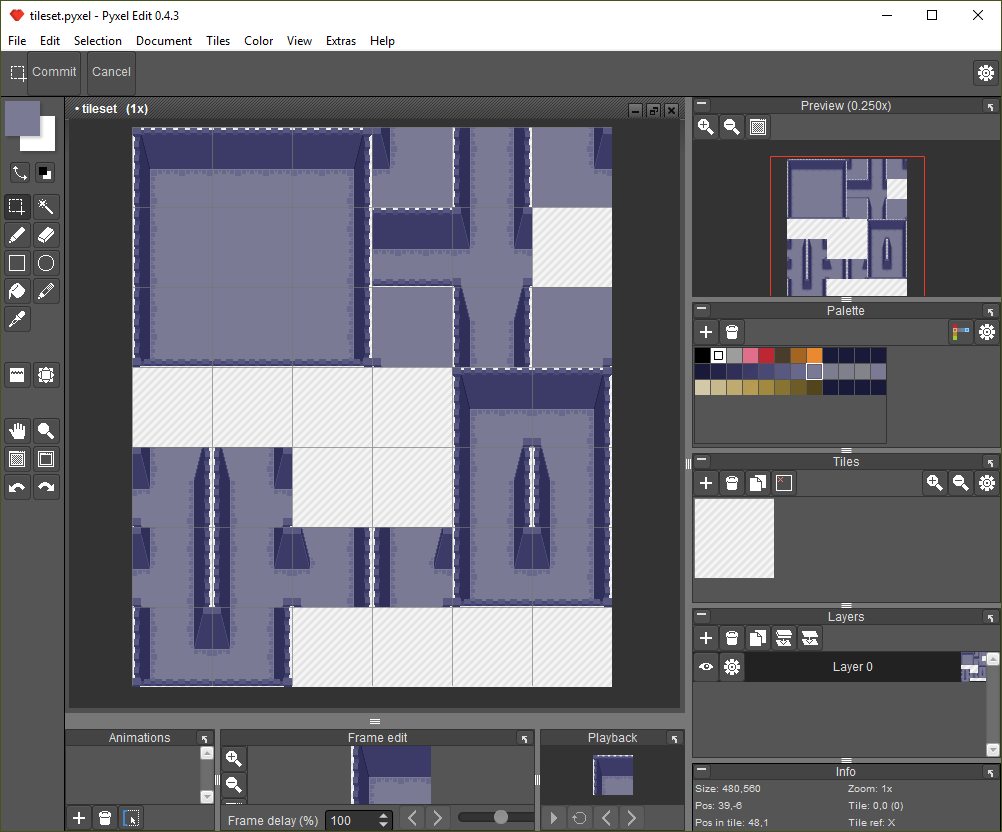 But that’s a good thing, of course. One thing that I hadn’t anticipated was that the specific perspective I decided to use would almost double the size of the tileset. Had I made a quick placeholder, nothing would have translated from the initial tests to the actual design of the game, and I’d have to either work in a different, less pleasing perspective or once again heavily refit the dungeon generation system.

It’s also good because in the time it took me to build a workable tileset, I also thought up a method of simplifying dungeon generation even further, but hopefully we’ll get into that next week when I try it out.