Danganronpa is a video game made by Spike Chunsoft, and was originally released around 2012 for the PSP. Interestingly, I had somehow stumbled into the demo version of this game when I was traversing the Japanese PSN for...something or other. I downloaded it, and while I had literally no idea what was going on, I was definitely intrigued by it. Fast forward a couple of years later, and someone on the Something Awful forums begins a screenshot based let's play of the game. It literally and metaphorically explodes, thanks to it's ridiculous writing and premise. So popular was this let's play that it pretty much single handedly spawned the western fandom for the game and, if you ask me, caused NISA to pick up the game for a proper english translation on the Vita. It's popularity still hasn't died off from what I can tell, as a PS4 port of both games has just been released in the west and a third game is on it's way later on in the year. It's very easy to see why this is. 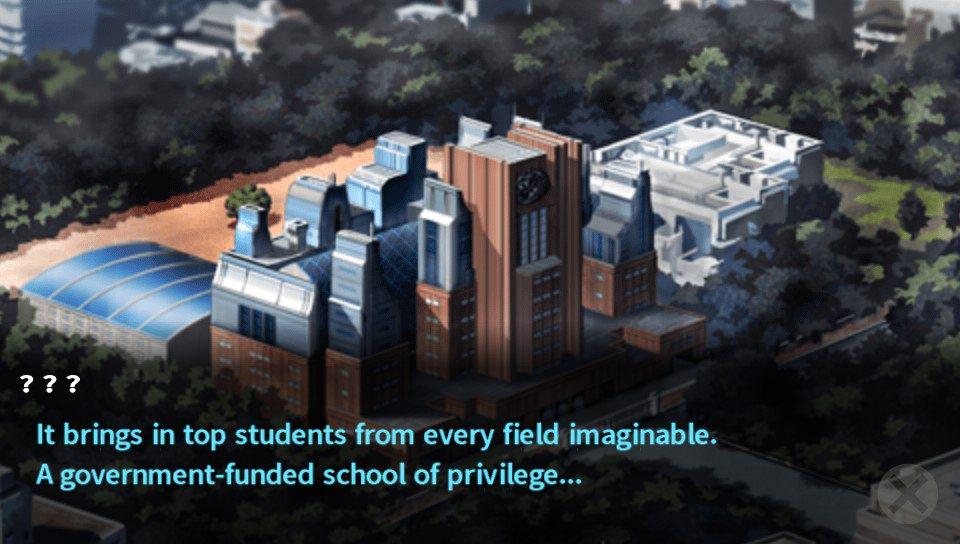 I'm going to try to be as spoiler-free as possible here, trying to not extend past the first chapter in terms of discussing the game itself. The main plot is as follows: 15 students are to attend Hope's Peak Academy, a prestigious government-sanctioned school where graduates are said to be “set for life”. All the students are known to have “Ultimate” abilities, such as Ultimate Baseball Player or Ultimate Fashionista, except for two of them. The first is the mysterious Kyoko Kirigiri, and the second is our plucky protagonist, Makoto Naegi. In fact, Makoto is pretty much your most perfectly average person – there's nothing particularly stand out about him. He was just subject to the school's lucky dip and happened to win it, effectively netting him the title of “Ultimate Lucky Student”. However, as Makoto enters the main hall of the building, his vision suddenly goes warped and he faints, awakening up in one of the school’s classrooms. Except, things are a little...off. For example, not only is there a surveillance camera in the room, but also all the windows are firmly covered and bolted with thick metal.

After gathering his senses, Makoto finds a note on the desk he woke up at telling him to meet in the main hall. He plods on over, and finds the other 14 students there waiting for him. Oh, and also the entire thing is locked off with a massive fuck-off sized vault door and two sentry guns hanging from the ceiling. After a brief bit of banter between everyone about Makoto /finally/ arriving, he goes one by one to everyone for introductions, wherein we learn their names and their Ultimate ability. After that's all said and done, a monitor in the room turns on, and a mysterious silhouette gives the announcement to meet in the gym. Everyone gets understandably nervous and freaked out, but slowly make their way into the gym. It's here where we meet the villain of the game, Monokuma, a bear-like creature as voiced by Nobuyo Ōyama in the Japanese version, aka the voice of Doraemon (from about 1979 to 2005.) The obvious banter between the characters and this teddy bear figure happens before he has the chance to finally drop the truth bomb on the students: If they want to escape the school, they have to kill one of their fellow students. If they kill someone, and successfully bluff their way through a class trial without being caught out then they “graduate”, allowing them to leave the school whilst killing everyone else. However, if they're caught, then they get capitally punished themselves. 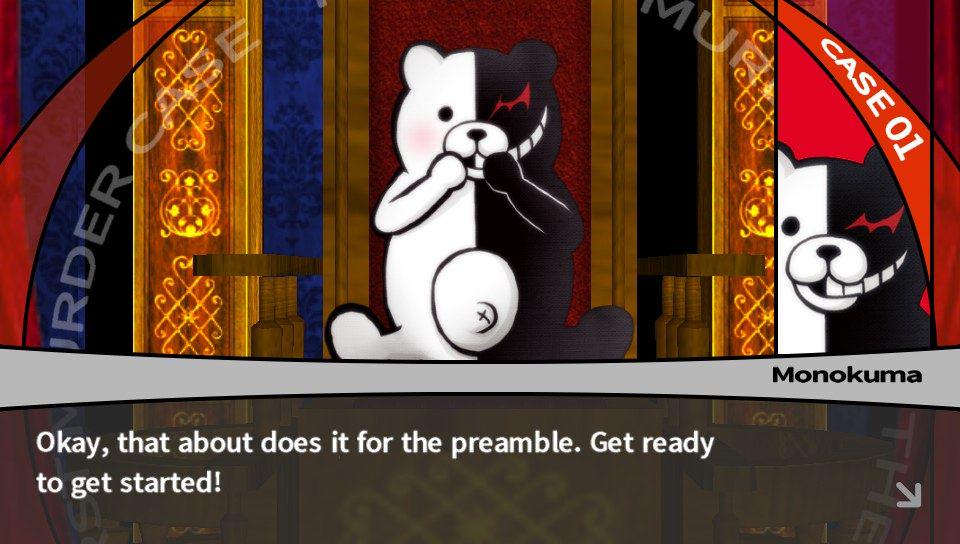 Right, enough plot divulging, it's time to talk about the controls for this game. There are two modes of control when traversing around the school. If you're in one of the school's many corridors, then the left stick will move you about in sort of semi-tank like manner and the right stick will adjust your camera view. If you're in a room, then you're generally stuck in a fixed camera position, with the left stick moving a cursor about, and the right stick along with the L and R buttons shifting the camera left and right so you can get a more clear view of certain items. Oh, and in both modes, the X button will look at/interact with whatever is highlighted on your cursor. The cursor locks onto items you can look at/interact with, but if you want a sort of “at a glance” view of everything that's interactive in the room then you can do that with a quick tap of the triangle button.

Generally, most of the time, these controls work fairly well. However I found that completely ignoring the right stick when moving through corridors to be the best options, as awkward as it is. Equally, I found that the lock on system for the cursor to be weirdly picky, especially when there's a person in front of, or in between of another interactable item. It should be mentioned that one of this game's fun unique style for graphics is that every item and person is a sprite. The only 3d models in sight are generally saved for scenery in the corridor areas rather than the actual items themselves. Visually striking for sure and I think it definitely looks better than if they were all 3d models, but it does cause the problem I mentioned of the lock on cursor not entirely being too sure about what to stick on. It's even more of a problem when there’s a lot of things to look at within a small area.

Class trials are generally split up into 5 segments: Discussion, where everyone is having a natter about how a murder could have gone down, with occasional input from the player answering questions or giving evidence when needed; Non-stop Debate, where a rather impressive looking debate with text flying everywhere speeds by and requires the player to shoot a specific “weak point” marked out in orange with one of their amazingly titled Truth Bullets; Bullet Time Battle, a pseudo rhythm minigame where players must keep in time with the tempo of the music and target arguments a character is shouting to destroy them, with the end goal of using a Truth Bullet to persuade them on whatever it is they're denying; Hangman's Gambit where the player must spell out a specific keyword or phrase relevant to the debate and finally the Closing Argument which has players fill out panels of a manga that detail the events of the entire murder.  These are all introduced to the player with relevant instructions as they appear, along with any additional mechanics added to each segment. 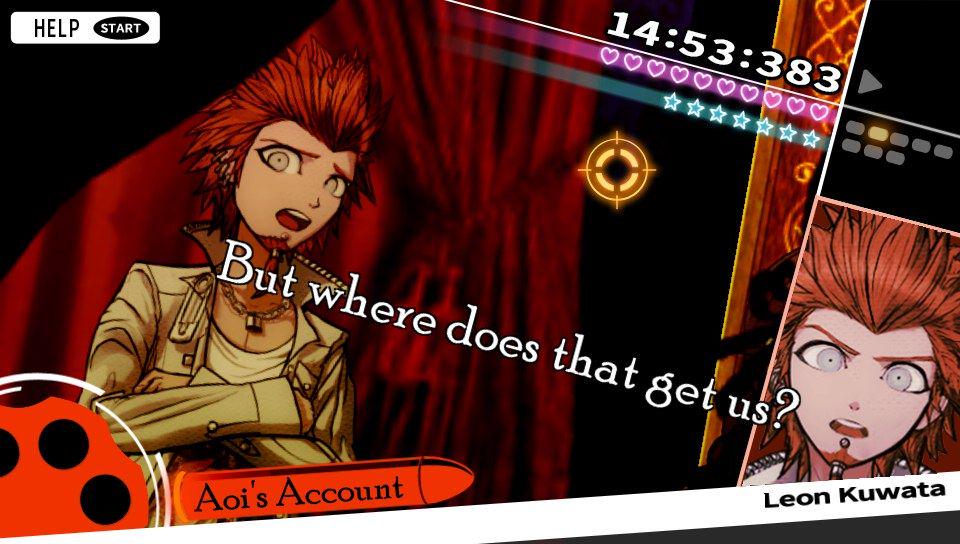 A Non-Stop Debate in progress.

So yeah, the entire premise and main plot point to this game is pretty damn ridiculous in itself and already grabs your attention right from the get go. For me though, it's less the plot writing, but the character writing. The characters are incredibly well written, to the point that you can relate incredibly well to some of them at times. Annoyingly, my absolute favourite characters in the game in terms of their writing doesn’t appear until later in the game meaning I can't really talk about them. But you'll know who I'm on about when they pop up. Other characters such as Chihiro are so amazingly adorable and cute and oh my gosh I want to protect you so much, you precious friend aaaa

Ahem. Moving on, also of note is the absolutely fantastic soundtrack provided by the almighty Masafumi Takada, who has previously composed music for games such as Killer7 and No More Heroes. Takada's style perfectly fits this game to a T, his songs bringing just the right amount of tension or pulse-pounding beats for the situation currently happening in the game. Two of my favourite tracks include the jazzy investigation music “BOX 15” as well as the addictive and danceable tune “Class Trial (The Sun)”.

If you haven't guessed already, I'm rapidly running out of things to mention or talk about due to the massive restraints of not spoiling the game for you. So I'm just gonna say it now: play this game. Unless you are sensitive to blood or murder scenes, you're gonna have a super good time with this game thanks to its genius writing and engaging gameplay. Thankfully, the top lads at NIS America have not only brought it to Vita and PS4, but to PC, Mac and Linux as well. So you have no excuse apart from monetary reasons to not go and play this dang thing right now.