Doctor Who is back, yay! This week we recap the state of the series as a whole and give the new episode a quick once-over, so spoilers abound!

Oh boy, where to start? Okay, the Doctor is a renegade Time Lord from the Planet Gallifrey. What this means in general effect is that he's a superhero whose powers are the ownership of a time-travelling spaceship (which is always disguised as a 1960s British Police Telephone Box because of reasons), diplomacy and narrative convenience. He travels around in space and time (but mostly on Earth and within the constraints of written history or cheaply-imagined futures) generally doing the whole turning up, saving a bunch of people (or aliens) from aliens (or people) then disappearing into another adventure thing. Then the episode ends and the entire internet declares it either God's gift to television or the worst calamity ever to befall this planet. Or usually both. 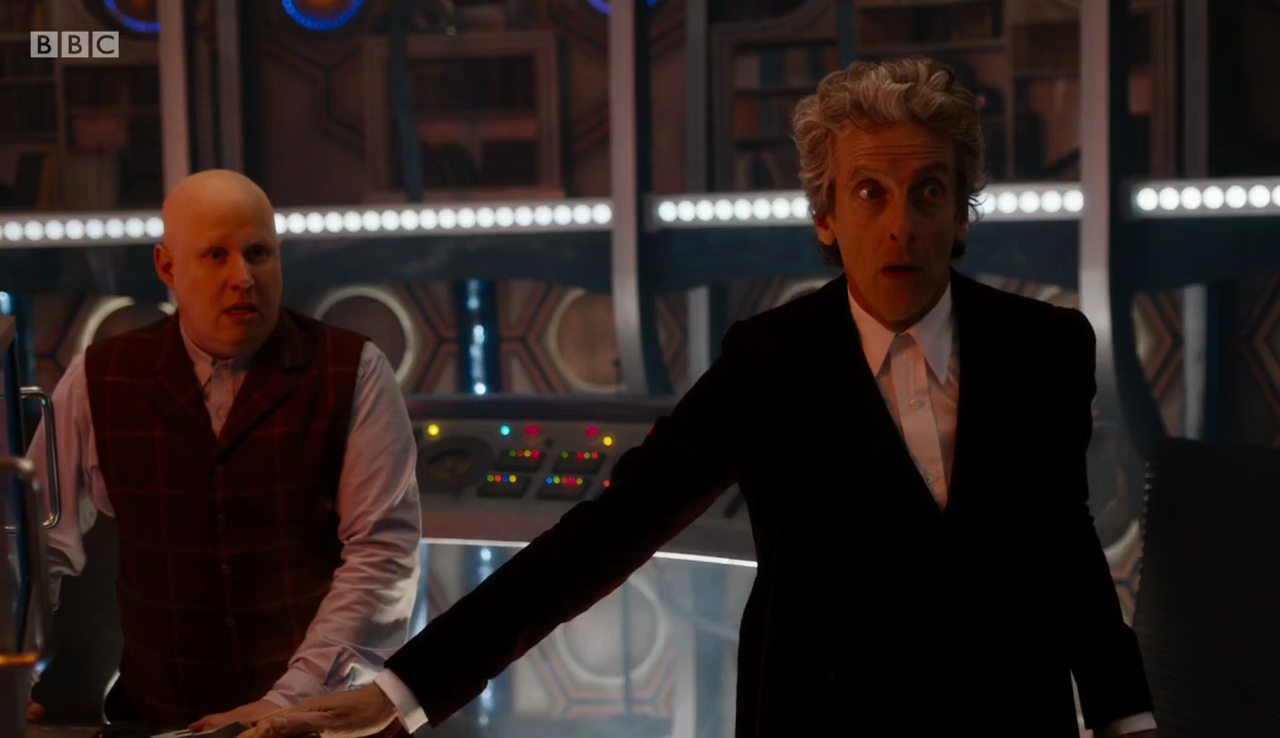 Technically he's the 12th actor to play the Doctor, but only if you ignore a few.

Occasionally he dies and is resurrected, like space Jesus, but if Jesus was replaced by a different actor when he stepped out of the tomb (Happy Easter, everyone). Also he used to think he was the last Timelord, but it turned out his entire planet was just in hiding. He also used to have a wife, but she died in her first appearance, and then just kept turning up again and again regardless. He also used to have a granddaughter, but she's also implied to be very dead at this point.

Currently our hero is being played by Peter Capaldi, the foul-mouthed Scottish guy from The Thick of It. He used to have a travelling companion called Clara, but she died and then went off with an immortal lady The Doctor accidentally created. He sort of replaced her with Nardole, aka Matt Lucas wearing an anorak, but he's due for another young lady to join his party because having a pretty girl on the cover sells DVDs. So basically, that's where the series stands right now; everyone The Doctor actually likes is dead again, so he's moping around time with George Dawes just generally continuing to be The Doctor but in a slightly more lonely manner.

So that's where we're at going into this.

So, onto the episode

Bill Potts is a student at the University in Bristol. Well, not an official student, but she's been using her employment in the canteen to sneak into lectures being taught by one specific professor. He's been teaching there for 50, maybe 70 years and whilst he's supposed to be teaching physics he has a habit of going off onto fantastical tangents that delve into poetry and philosophy. He's also called The Doctor, which is useful because that's the guy this show is about.

The Doctor summons Bill to his office to, basically, offer her a scholarship. If she can turn up to all of his sessions on time and keep her grades at a first or above then he will personally tutor her. As tuition fees currently cost more than £9,000 a year in the UK she immediately agrees. “But what do I call you?” she asks. “I can't just call you the Doctor: Doctor What?” she continues in a subversion that's now so old that I wish they had just played it straight. 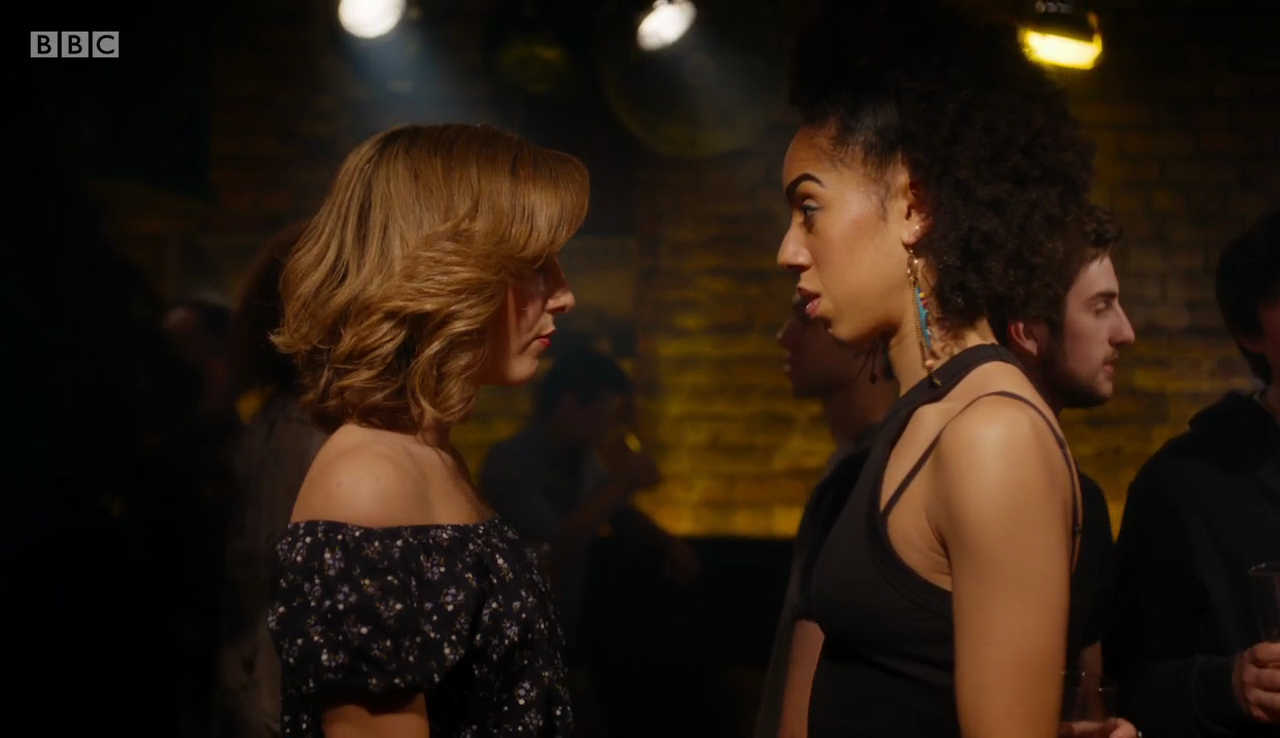 Have we established that Bill is gay? Cause they're pretty damn sure to establish she's gay.

Unfortunately, whilst being a proper student (with “texts, snogging, a vegan wrap...” as the doctor summarises it) Bill encounters and establishes a mighty crush on Heather, a young lady with an iris 'defect' that looks like a star. If that comic-book tier design wasn't suspicious enough, Heather soon gets consumed by a mysterious puddle (as young ladies are so often prone to do) and proceeds to stalk Bill across campus in a distinctly Japanese horror inspired manner.

She goes to see the Doctor who assumes that the soggy Sadako is after his mysterious vault in the basement (season plot alert, season plot alert), and drags Bill into his police box for the usual 'it's bigger on the inside' routine. From there he tests the limits of the monster by travelling to the other side of the world, to the other end of the galaxy, and to a point in space and time where the Daleks are fighting the Movellans, where the sog faces off against a Dalek and easily survives, making 'can defeat the Daleks' the 'Can beat up Lt. Worf' of the Doctor Who universe once again.

Bill realises that the reason it's after her specifically was because pre-puddle Heather had an almighty crush on her, and Bill told Heather not to leave without her. Bill lets Heather down gently, and Heather goes off to explore space as a soggy oily shape-shifting spaceship. The Doctor tries to wipe Bill's mind, but Bill knows how this bloody genre works thank you very much, and convinces The Doctor to let her keep her memories of events, and hints that she wouldn't mind going off on some adventures in time and space herself now that she knows what his police box is. He initially refuses, but then does the whole 'reappearing in front of the companion on their way out' thing. Bill asks what changed his mind, and he replies 'Time'. Episode finished, job done.

So how was this one, really?

Good, actually! It's not the first time that an episode introducing a new companion took it a little slow, but this time it offered a pleasant diversion from the breakneck pace that the show has a habit of falling into. Whilst Heather herself isn't necessarily the strongest of villains, or even anything more than  a convenient narrative tool to let Bill quickly get up to speed some of the more important aspects of the series (it's bigger on the inside, it moves in space and time, Daleks are really bad, etc), Moffat mostly uses this episode as an opportunity to establish the character of Bill and to develop the relationship between her and The Doctor, and between The Doctor and Nardole in a manner that almost entirely overshadows the monster of the week. 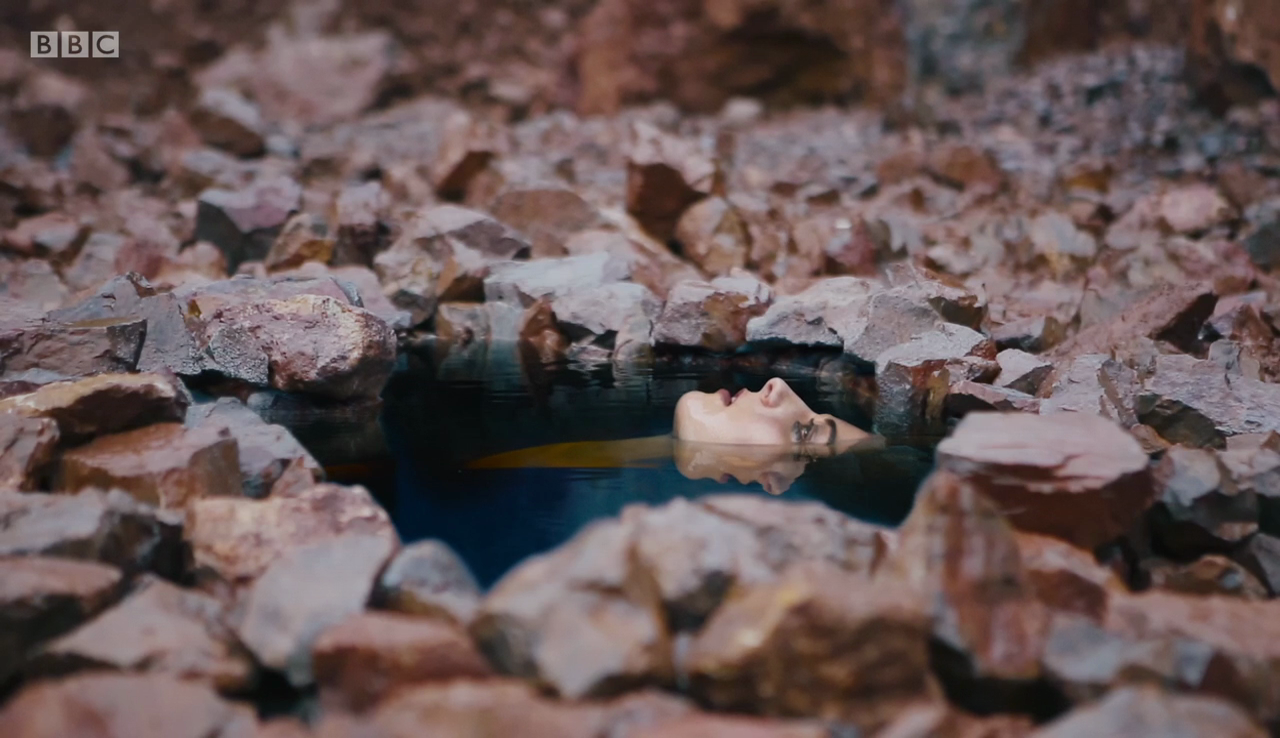 Which is not to say that the monster of the week isn't scary. When the slightly dodgy made-for-TV CGI doesn't let the show down, the drowned girl motif is some of the creepiest imagery we've seen on new Who, and as the plot is given space to breathe for the first two thirds of the episode there's some decent pacing and tension-building leading to some excellent scenes. Stephanie Hyam does an wonderful job playing the, at first aloof, and then creepy figure of Heather. Doubly so, considering that she spends the vast majority of her screen time looking absolutely soaking wet.

Bill herself is extremely likable, and for once Moffat seems to have both pandered to the fans and worked towards making an interesting female character in a manner that generally comes off as successful. Bill is quickly established to be an intelligent underdog who asks all the right questions, and who has a penchant for Science Fiction, a list of qualities that most whovians would find perhaps a little too uncanny were she not also Black, British and gay. Pearl Mackie plays the role with a big chunk of natural charisma, and I'm looking forward to seeing how her character is developed further over the next few episodes.

Nardole continues to be entertaining too, exchanging Matt Lucas' usually more broad performance for something a little more subtle. He seems to have become less the comic relief and more of the Doctor's personal Igor and, weirdly, a voice of reason against the Doctor's general gung-ho approach. Or perhaps a voice of cowardice. Either is a useful parallel, especially seeing as Bill herself seems to be as brave as she is talkative.

This is Moffat's last season, so it wouldn't surprise me at this point if he starts throwing out as much oldschool lore as the BBC will let him get away with. In this episode he's already thrown in the Movellans and a photograph of his granddaughter Susan as visual nods, and we know from publicity stills that The Doctor is due to deal with 1960s rubber-suited Mondas Cybermen, so hopefully this is the season where he just goes all out playing with the legacy tools at his disposal. It would make a nice change from him weaving over-complicated stories about mysterious women and then trying to jam them into episodes that aren't long enough to keep up with their own plots, let alone long arcs.

This one's a pretty good one! It's got a good balance of tense horror and character development and whilst the pacing falls apart in the final act, it's a good introduction for the new companion, and a pretty good jumping on point for viewers.

[Retrospective 2020 note: Mark did plan on keeping this up as a series of articles but unfortunately never got round to it. There IS a draft for the second episode sitting about here, but it's nowhere near finished enough to post sadly. Executive Dysfunction really is a thorn in our sides.]