So here we are again already. I'm starting to regret thinking this would be a good idea for a weekly article. Anyway, before we begin, since I last wrote this column there have been three new bundles at the £1/$1/€1 price point and I'd just like to quickly highlight just how bad one of them is. The 19th Go Go Bundle Limited bundle has, alongside the usual tripe, a single-screen tank 'game' that exists purely to give players a white supremacist achievement to display on their profile page. As you can imagine, I decided against giving any money to Go Go Bundle this time around.

It may look like a harmless string of numbers, but this is an ADL-recognised hate symbol.

It's also getting very difficult to avoid games made by Dexion Games. Well, I say 'made'. Dexion Games is one of a bevy of companies that purchases sample partially-built games on the Unity Asset Store and then repackages them with only minor changes for sale to unwitting consumers on Steam. Dexion have released 14 of such games since September, often selling off keys to bundle sites on the cheap before the games even launch on the Steam platform. Dexion currently have games in both the DIG Super Bundle 120 and The Go Go Bundle Limited #19 bundle.

So let us instead look at a slightly older but still entirely available piece of crap. DailyIndieGame's DIG Super Bundle 119 which offers six games for the princely sum of 99 American cents, or 50 cents if you pay with Bitcoins. It's been running for just over a week and there's more than a month left on the clock should you wish to grab it. Lets get to it, then! 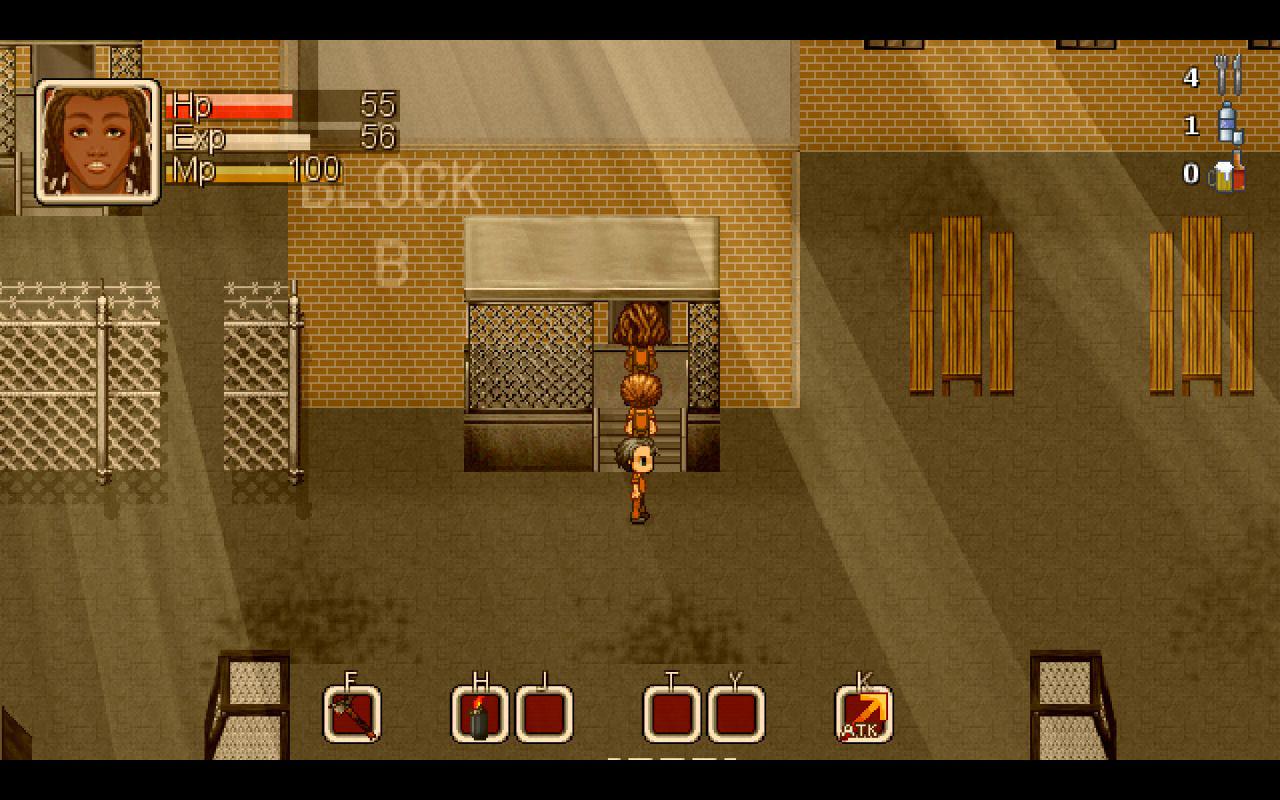 Sometimes it feels like there are more action keys than zombies.

Story of the Survivor: Prisoner immediately greets the player with a plea from the developers to go easy on their game because it was made by a pair of amateurs who just wanted to create something. As one half of a pair of amateurs who just wants to create things myself I can empathise. It's an ARPG made in RPG Maker, which is an odd choice as RPG Maker is more traditionally an engine for making turn based games and so any . As such, the 'mash the button' style combat feels clunky and unresponsive, which combined with the game's awkward choice of key bindings makes for some particularly poor combat. This is only exacerbated by the lack of threat that the game's zombies seem to pose in the early game. It's quite a shame, as there's plenty other elements to like in this moody zombie prison escape drama. It also uses a graphics set which isn't the default RTP, which makes for a nice change. In my brief time testing the game, however, I couldn't find any way to save. I suspect there are save points later on, but I'm in no rush to replay that first 30 minutes or so any time soon to pick up where I left off. 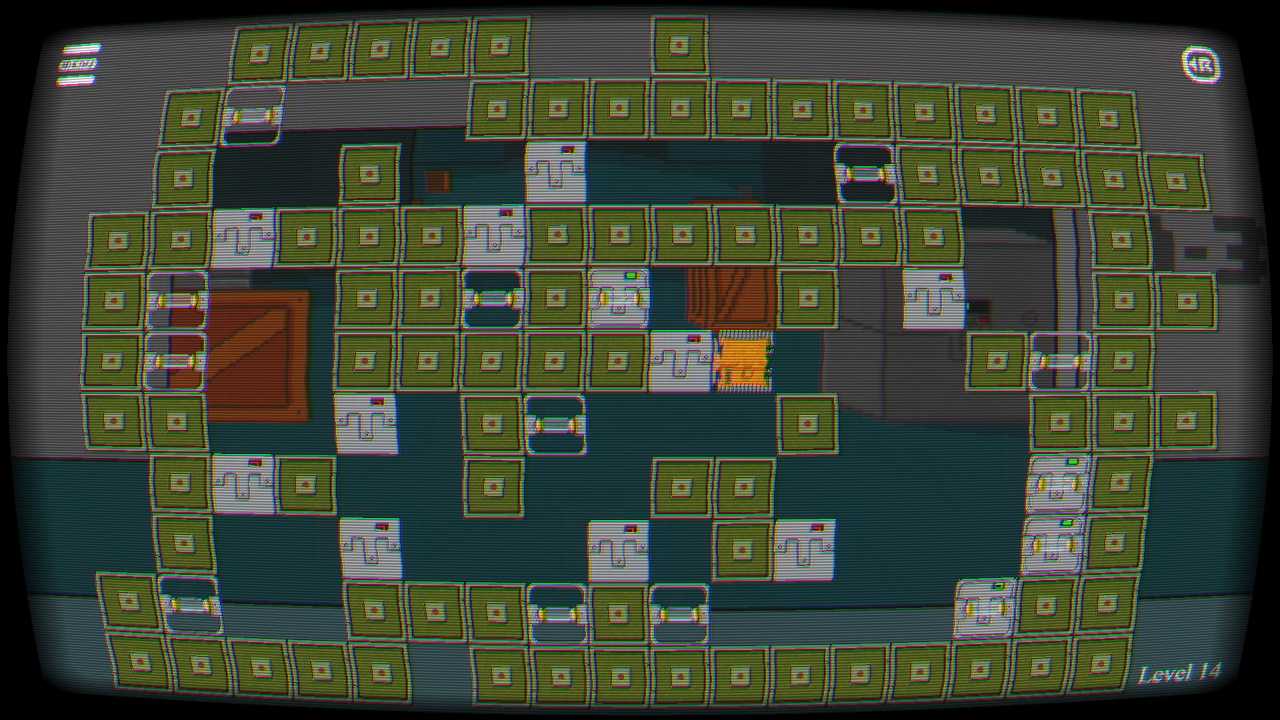 It's Sokoban. But kind of gritty.

Tanker is, for the most part, a serviceable Sokoban clone where you use a tank to push blocks around a warehouse. It's got nice chunky old computer graphics distorted through a CRT filter and an moody, synthy soundtrack that feels like the composer (Roborg) listened to a lot of Eurythmics before they sat down to their computer that day. Unfortunately, it's not actually that fun to play. The game has very few consolidations to the player (you can't rewind moves for example, only restart levels from the beginning) and the game's slow movement makes some of the larger puzzles a bit of a slog. Also, at the risk of seeming like an idiot, I'm pretty sure that Level 14 isn't actually finishable. It's quite possible that the game has some sort of hidden mechanic that hasn't been explained to the player (Some levels have a clearly highlighted block that you have to tap until it disappears for some reason) but by standard Sokoban rules it just isn't functional. 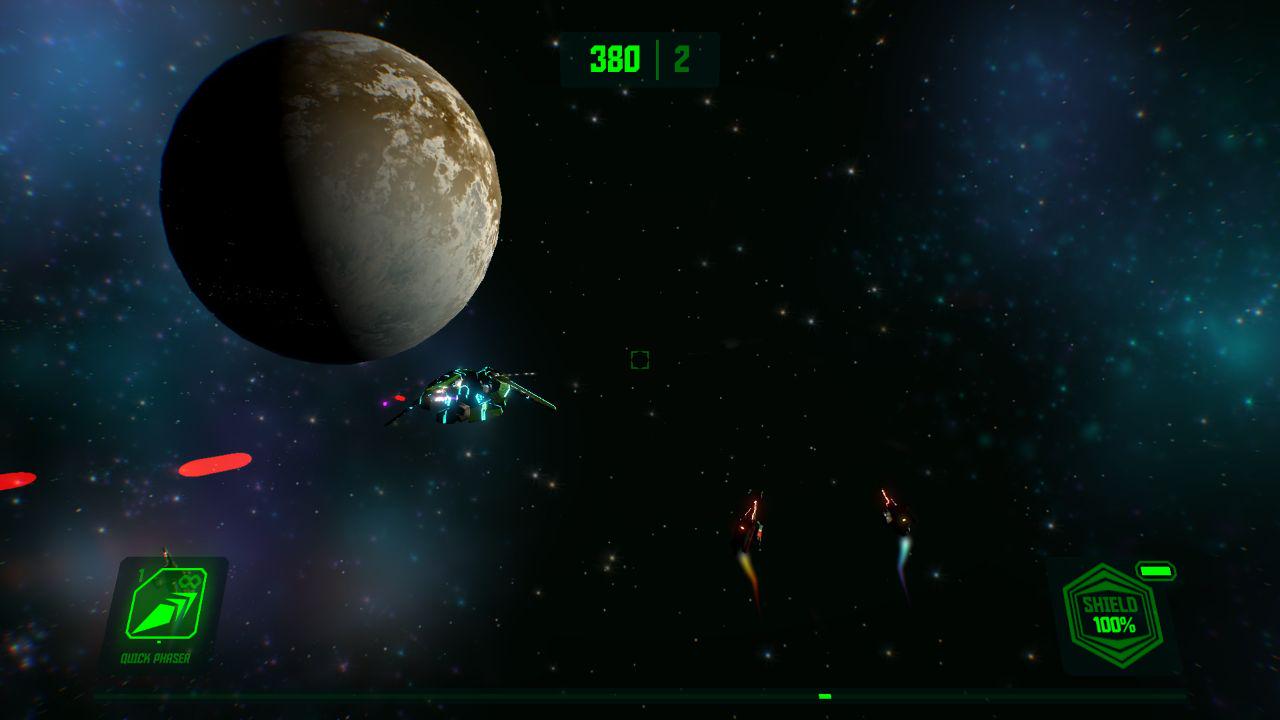 If you squint you might be able to see some ships.

Nanoscape thinks it's first-person Galaga but it feels a lot more like first-person Space Invaders complete with all the clunk of the arcade classic, but shifted into a perspective where the player can't quite tell whether or not the projectiles they are dodging are going to hit them. It would in no way surprise me if someone told me that the game was built in the traditional top-down view and then shifted in a manner that makes it barely playable: none of the spacecraft you're facing look good, and half of the screen goes almost entirely unused. Anyway, the player is (probably) a spaceship, and their goal is to shoot down other spaceships whilst avoiding being shot down yourself. To do this you have a basic fire attack (which jolts the entire screen whenever you fire it, which is constantly because this is a shoot-em-up) and a phase shift that presumably dodges attacks but is basically useless because you can't tell when attacks are about to hit you. There are also limited use special weapons that you can collect, but it's hard to tell if they actually do anything much because they look pretty similar to the base weapon and the enemies are too far away to judge if they make much more of an impact. First person Galaga is a cool idea, but this isn't how to implement it. 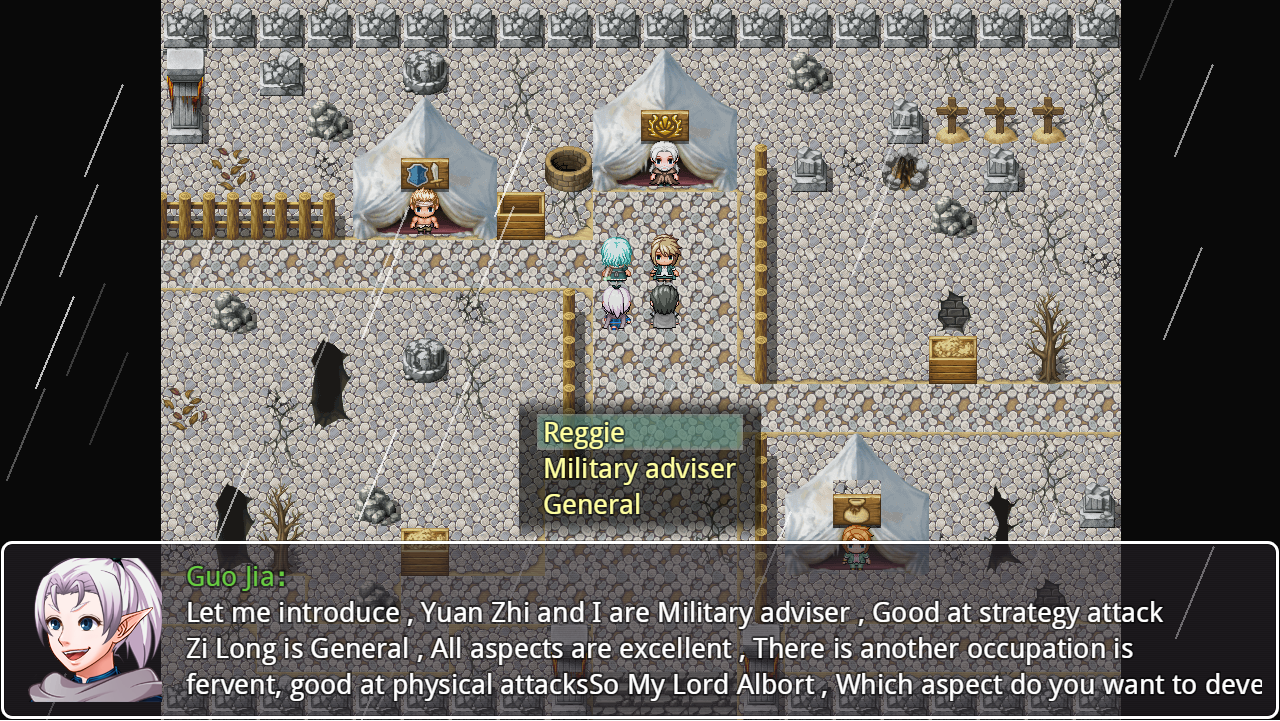 Another RPG Maker game (but this time in far more traditional vein), Three Kingdoms is a Chinese-made JRPG about a nerd (Named Albort, for some reason) who has an accident whilst photographing a cosplayer at a Dynasty Warriors game launch party and finds himself leading an army in a fantasy world full of elves. It's an experience that immediately transported me back to RPG Maker games from two decades ago: it's big and empty, the art is the most boring use of the default RTP tilesets and characters, and the game is only half-translated. Enemies are damage sponges, but so are the players themselves which just means that combat is long and tedious. I also get the feeling that I'm supposed to know something about The Romance of the Three Kingdoms to even understand what is going on in the first place. I don't. 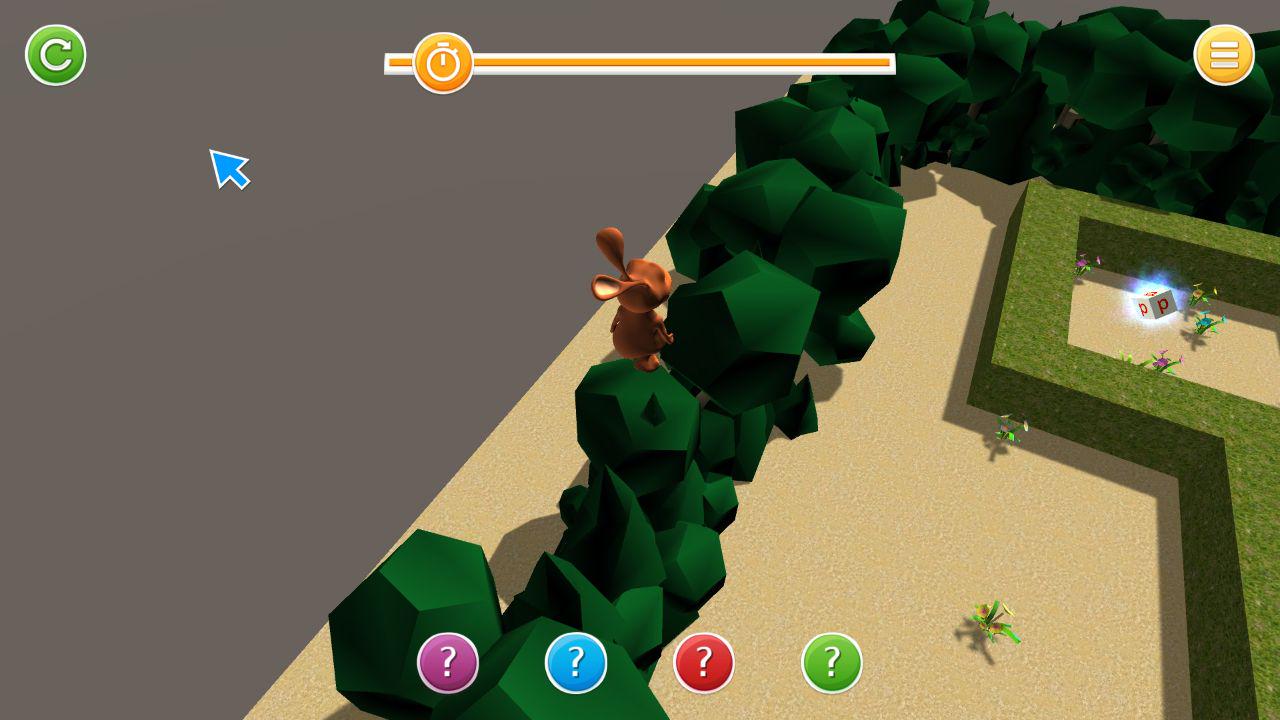 In Mr Rabbit's Alphabet Forest Adventure, Mr Rabbit is supposed to adventure around a series of mazes collecting letters. Instead it's a horror game in which an horrifically off-model anthropomorphic rabbit is suddenly picked up by forces unknown, thrown against an object and ricocheted into an endless void while a soporific, saccharine ditty plays in the background. This happens uniformly; every single time the character moves out of a tiny rectangle in the middle of the first level it comes unhooked from the world and bounces into oblivion. As ways to learn your ABCs (or SATPs, as they're apparently teaching in the UK now) go, this one veers towards the horrific and non-functional. 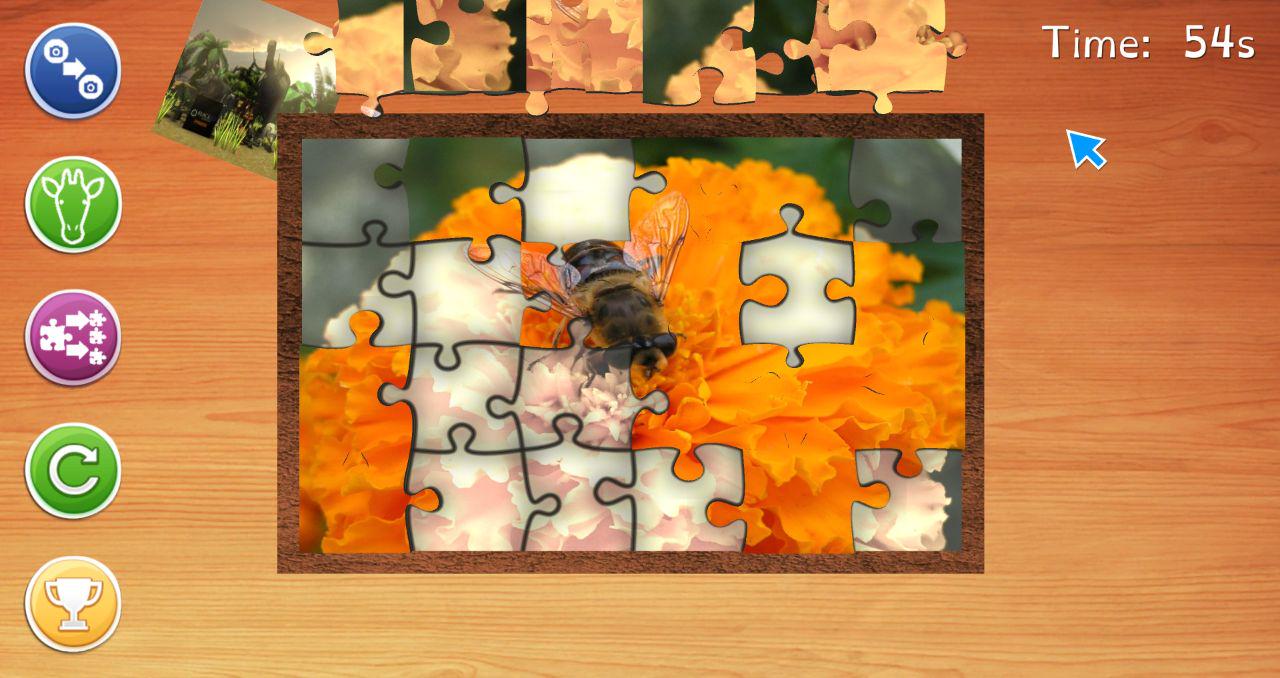 Unlike the other Mr Rabbit game, Mr Rabbit's Jigsaw Puzzle is an extremely simple children's jigsaw puzzle game. Players are tasked with reconstructing photographs of a random assortment of animals, buildings and landscapes, and the puzzles can be set to 12, 24 and 96 pieces. There's no time limit, and a black and white image of the photograph the player is putting together is shown behind the puzzle. There's not really much to say about it; aside from the fact that there's a tiny picture of Mr Rabbit in the top left corner there's nothing linking it to the other game, which is probably merciful come to think of it.

So was this batch worth a dollar?

Nope. Whilst Story of the Survivor: Prisoner is the strongest game here, it's still a bit of an awkward clunky thing. If you're willing to get over that, it's probably worth shelling out a little bit more to get both Prisoner and the original Story of the Survivor together the next time it's discounted on Steam instead of buying this bundle and only getting the spinoff. As for the rest of it? Gubbins, the lot of it. Broken and half-baked gubbins.