If you're anything like me, you've managed to leave buying Christmas presents right up until the last minute. That's okay, that's fine. I mean, sure, if you're not lucky enough to have an Amazon Prime account or to have the willingness to pay for expedited shipping that's going to leave you in a serious mess, but I'm not judging; you be you.

Still though; there's bound to be some gamer, geek, or gamer geek in your life that you still need to get something for, and sadly it's very difficult to convincingly wrap a steam key up in paper: believe me, I've tried. Obviously then, you're going to have to go back to the age old tradition of actually going into a brick and mortar location and buying the items you need, possibly even with physical currency if you still have some of that lying around. But in these final few days of frantic shopping, who can deal with the horrors of traffic, crowded malls and short supplies at the larger stores?

Well then, ladies, gentlemen and those who fit into neither category; may I present to you the only place you need go for all of your Holiday 2016 games buying needs; the high street of the town where Mostly Kobolds are based.

“But Mark!” I hear you say, “Mark! You cannot possibly be suggesting that the perfect place to buy things from just happens to be a fifteen minute walk from, very specifically, your house?” Well, yes, yes it is. And ignore the fact that there are literally no game shops in town any more (the only two having been killed off or relocated by the shift from last to current generation systems and the devaluation of stock that followed), because you're only going to be looking in one kind of store; Charity Shops.

Location 1: The Donna Louise Children's Hospice on the High Street 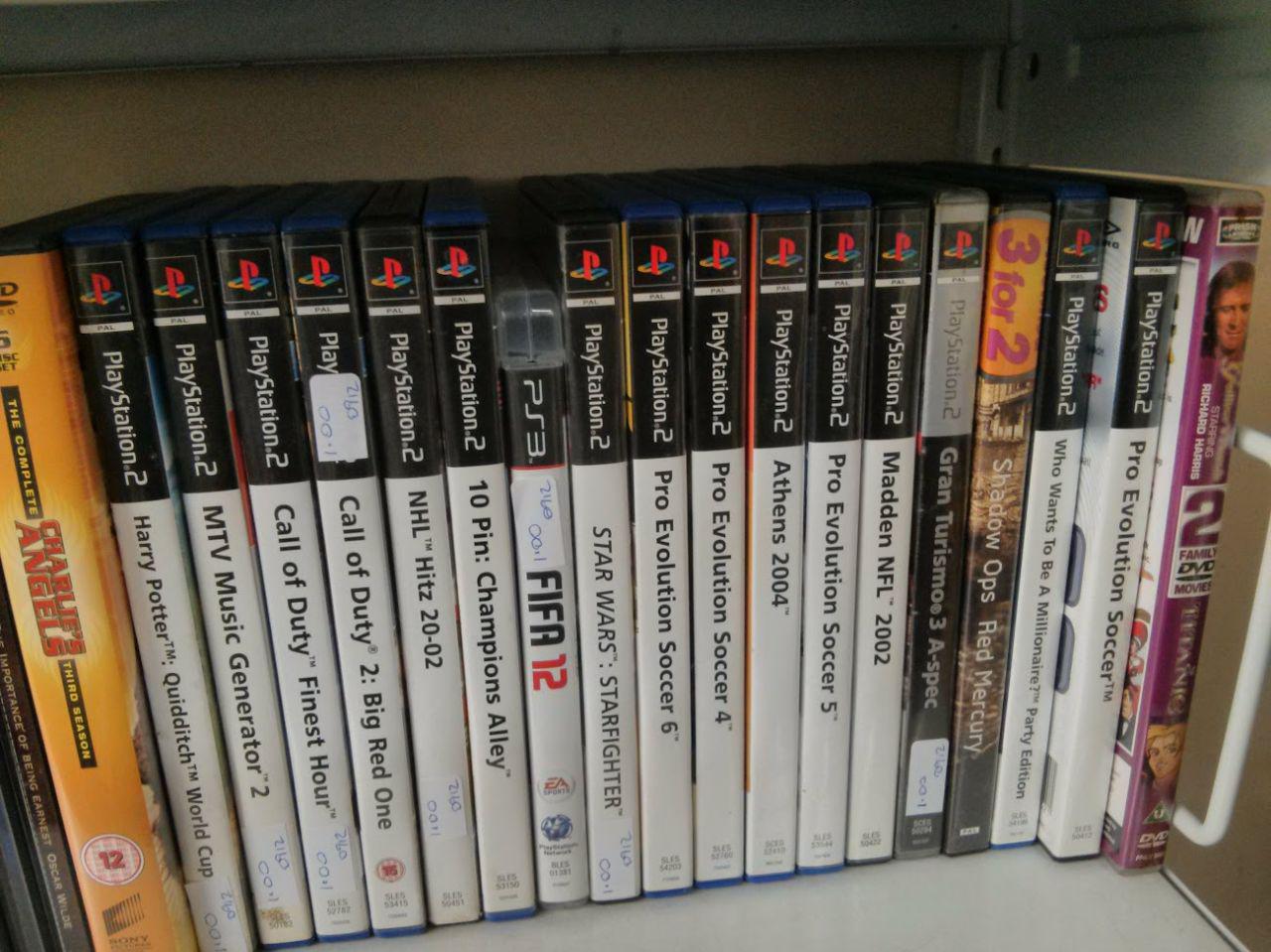 At first glance it looks like the choice of games on offer at the Donna Louise is a little underwhelming, and yeah, okay, you'd be entirely correct with that one. Aside from the opportunity to add Pro Evolution Soccers one and four through six to your secret collection of defunct sports games (you are collecting those, right? It's not just me?) there's not really much here worth talking about.

Still, with all the buzz for Rogue One in cinemas, giving your Star Wars loving friend Starfighter, one of the seemingly infinitesimal number of tie ins to The Phantom Menace might just give them enough of a reminder of how terrible their franchise was a mere decade and a half ago and to also make them feel old in the process. Score. 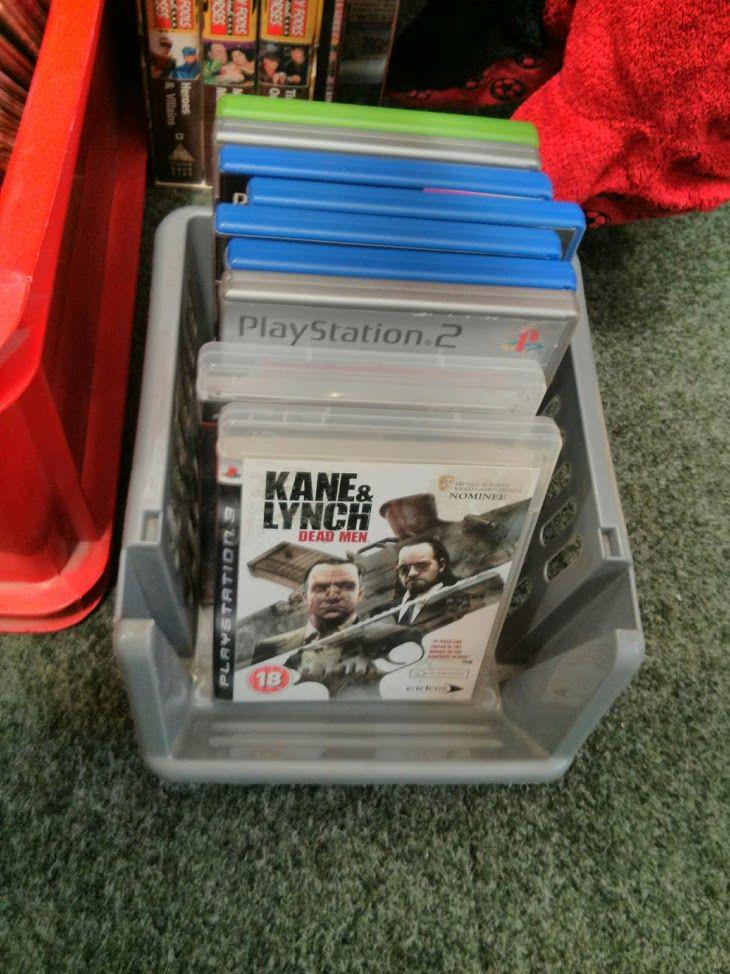 Our local wildlife trust is the newest charity shop on the high street and, therefore, the one with the smallest amount of gaming stock. These had been placed in a tiny box on the floor, presumably in an attempt to make customers empathise with badgers, foxes and other small mammals who view their world from that angle on a regular basis.

Fans of Giant Bomb may appreciate the irony of receiving Kane & Lynch: Dead Men for the PS4 a mere nine years after Jeff Gerstmann was fired from Gamespot for giving it a six out of ten at the same time as lavishly expensive ads for the game were adoring the site's homepage.  Otherwise the best bet is probably X-Men: Legends for the PS2, assuming that you're willing to accept the idea that the world would politically reject and legislate against a minority population for entirely arbitrary reasons which is obviously nonsense and certainly has no relevance today. 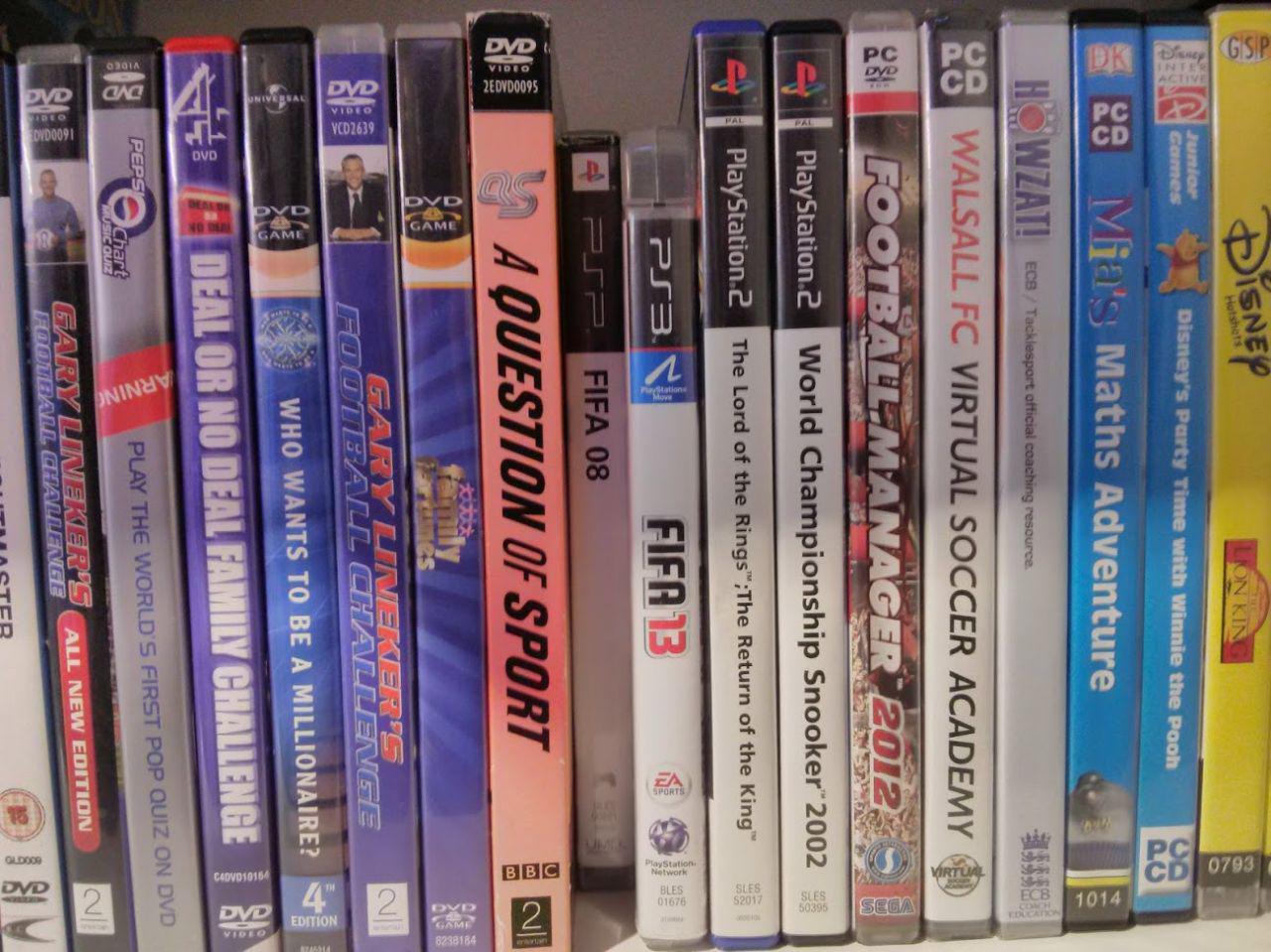 I hope you're ready for more defunct Sports games, because the Douglas Macmillen hospice has taken their defunct Sports game stock to a whole other level of specialisation. Whilst EA's FIFA series is represented (in the post-apocalyptic future, old copies of FIFA will be used as currency like bottlecaps are in Fallout), there are far, far more interesting choices to gift to your sportsball-adjacent friends.

Nothing says 'I completely forgot what team it is that you support' more succinctly than a gift of 2005's Walsall FC Virtual Soccer Academy for PC, a game so incredibly obscure that it doesn't even appear on the MobyGames database. Also of note; two different versions of Gary Lineker's Football Challenge, which would make a perfect gift for that person you know who voted Brexit and keeps complaining about 'Remoaners' on Facebook. 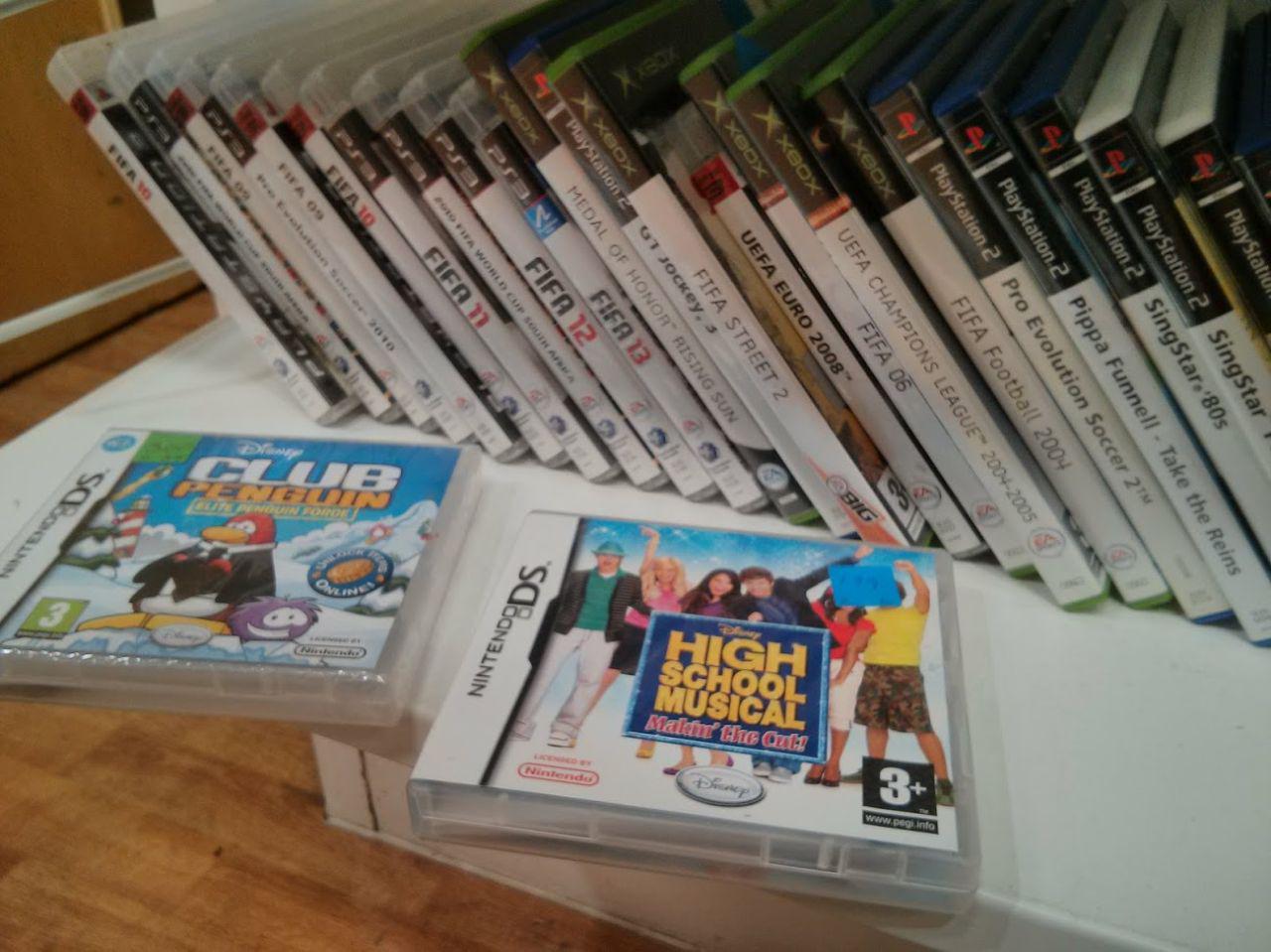 Shopping in the Salvation Army is always a difficult moral choice. On the one hand they have a beautiful, beautiful plethora of defunct sports games (come back, EA Big; we miss you!) that nearly beats out the rest of the town's offerings combined. On the other hand, I'm not sure I can support a militaristic temperance movement with a long history of homophobia that still hasn't been banished from official policy.

But that copy of Club Penguin: Elite Penguin Force still has the wrapping on it. Which means that the Penguin gold inside might still be valid! And how could your friends and or family possibly resist Take The Reins; a horse-riding game hosted by three time Olympic equestrian Medalist Pippa Funnell? Ooh, why must you tempt us, you ethically dubious religious organisation?

Location 5: That Weird Independent Cat Rescue Shop Next To The Wholefoods Place 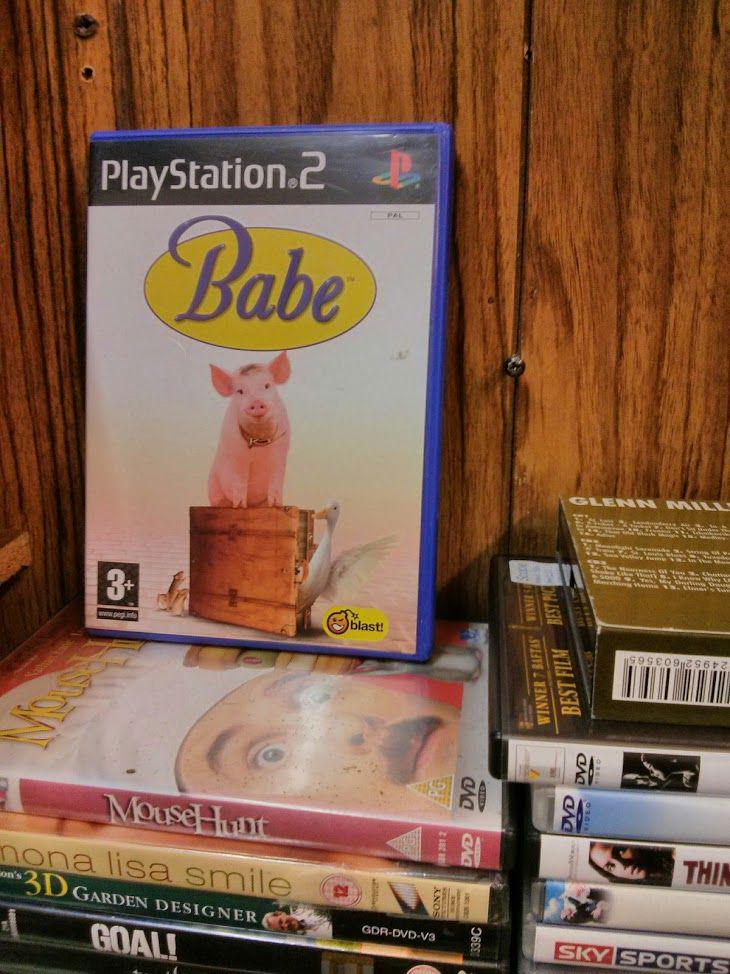 It's tiny, it hasn't been redecorated since the 1970s, nothing has a price label on it, it's very difficult to know who exactly I'm supposed to pay, and the quality control over donated items is nonexistent, so naturally this makes it the perfect place to find Christmas gifts. Sadly, however, it's not a great place to find video games, which are well hidden within the shop's enormous unorganised pile of old DVDs.

I did find a single gem, however; Babe for the Playstation 2, a sheep-herding game based on the first movie (which in turn were based on a far better Dick King-Smith novel), which would probably be absolutely perfect for a three year old niece or nephew who somehow was also alive in 1995, but uses a games system from the early 2000s. Which luckily actually describes at least three people on my list this year! 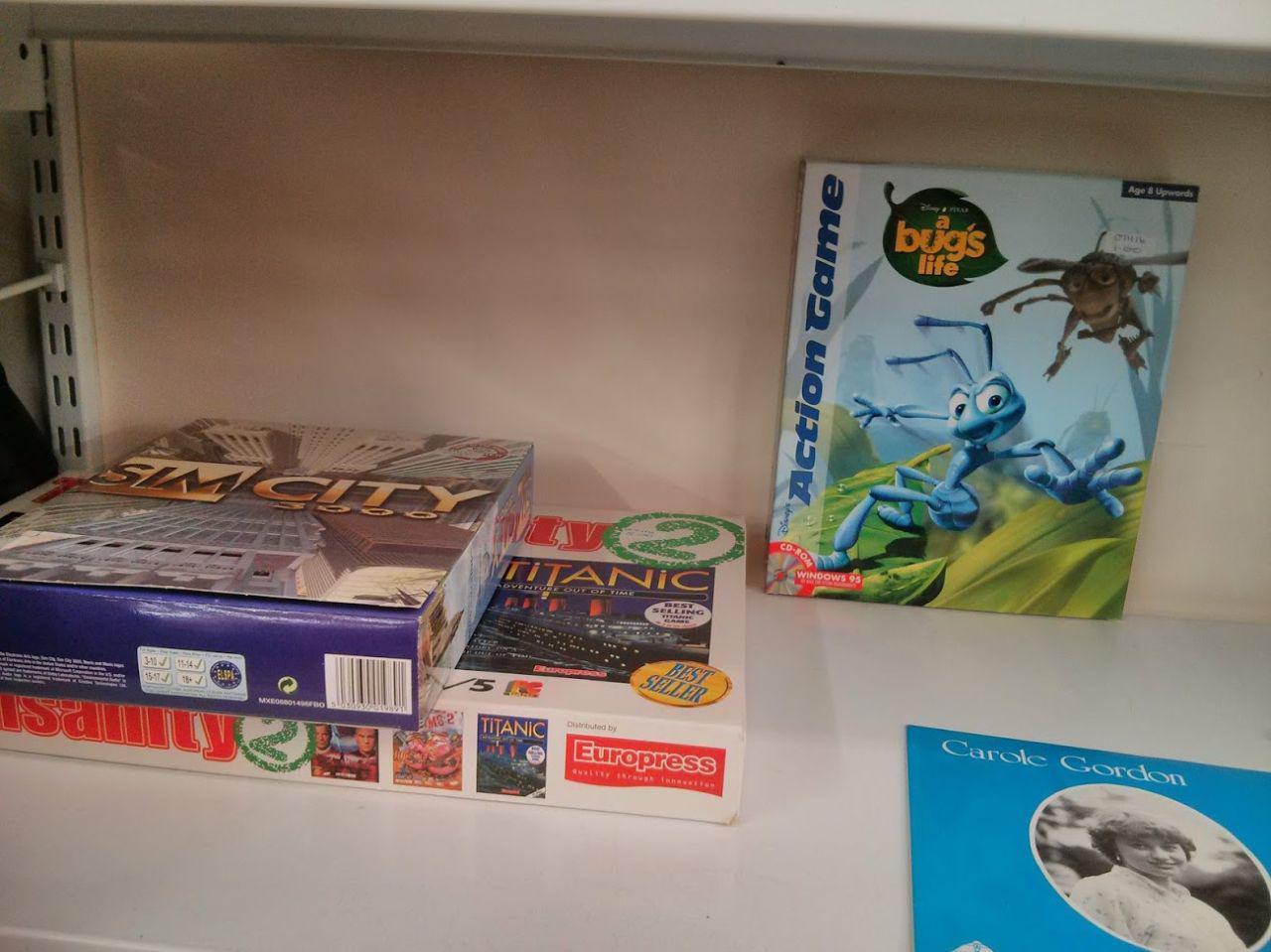 The DLH 'Your Shop' Superstore is basically there to sell furniture, and is the local equivalent of the place that Macklemore basically ruins by running through in the video to 'Thrift Shop', and yet this paradise of second hand woodwork seems to be a prime spot for some of the best deals on games I've seen this year. Whilst there's only a tiny selection left there at this time of year, it's entirely unique to those of the other stores in town in that it's made up entirely of Big Boxes. If you're not old enough to remember Big Boxes, they were the huge cardboard boxes that video games came in before DVD cases provided something both practical and non-biodegradable

And just look at these beauties! The rather awkwardly titled Total Insanity 2 pack, containing Star Trek: Generations, Worms 2, and Titanic: An Adventure Out Of Time would make an excellent addition to any game-fan's collection and you certainly wouldn't be hounded out of polite society for giving them three old Windows 95 games in a box so large it could take up an entire shelf. And who would possibly turn down SimCity 3000, the red-haired stepchild of the SimCity series?

But wait, that's not the best of it, because I also found these. 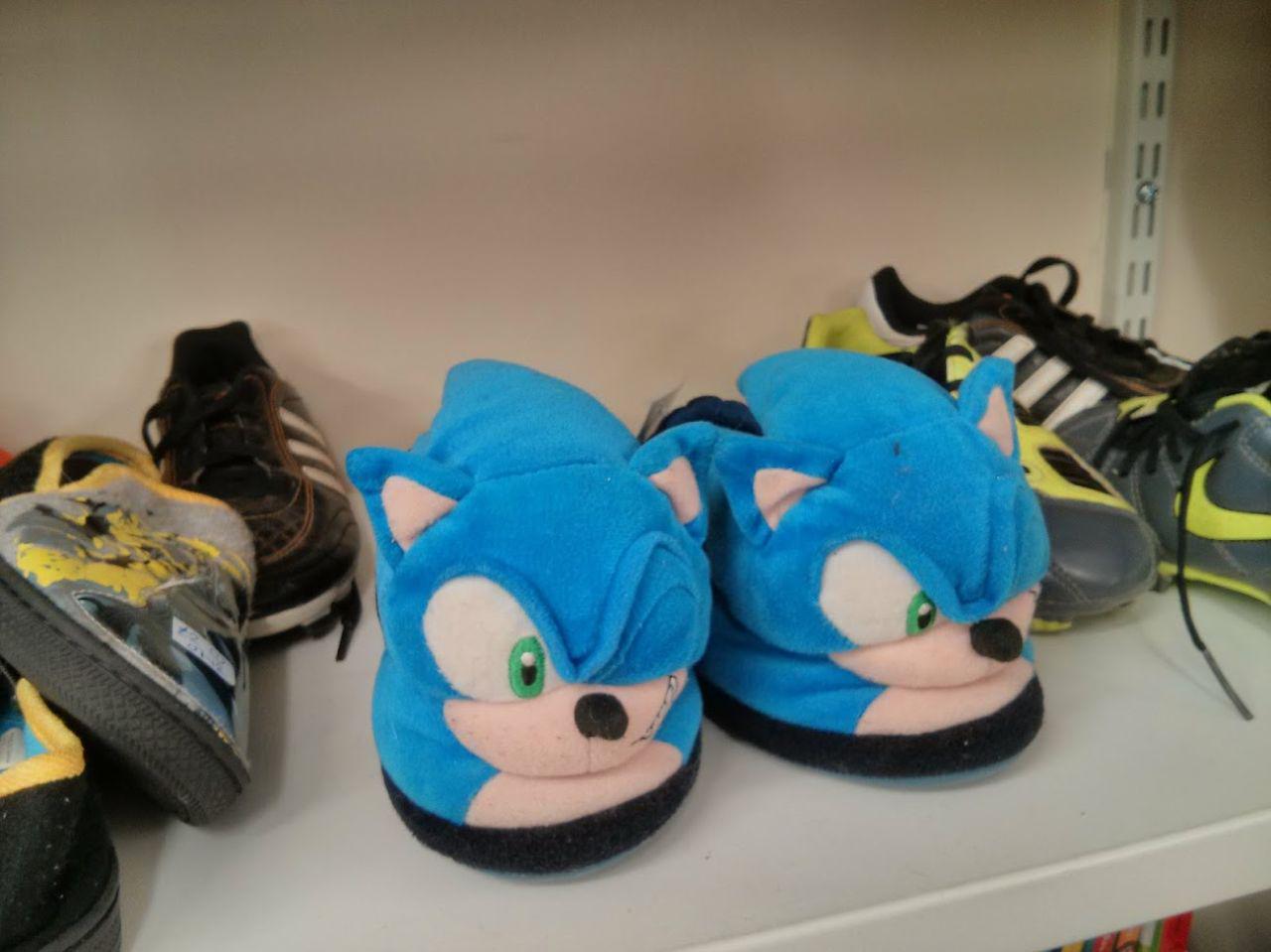 Just.... Glorious. The perfect gift for any gamer in your life. Assuming that they wear child-sized slippers.

[Retrospective 2020 note: Hello! Just adding a quick note onto here to say that this one had been sat in the post drafts folder this entire time despite being completely finished. I think the problem was Mark didn't manage to finish it before it would've been too late, so it never saw the light of day. I'll be posting any other “complete enough” drafts I come across, but as far as I know, this is the only one.]